Your cosmic dust roars around my fire
Spinning vortexes before my eyes
That gasp and exhale
As a thunderous Goddess
Taking solace in this darkened dance
Excitedly played upon the wall.
How good it feels, your warmth
That laps at the edges of my own sanity,
Spinning, my thoughts reach out
Grabbing your dangling hairs
While my ecstasy builds
So as to be just like the moon
Whom calls each of our moments home.

Carry me off
Thy foggy morning
A dream I cannot remember
Layered vista
Dripping rooftop
A lake that beckons
Thy lonely thoughts
To tarry upon
Each morning ritual
Designed
For thy slowest start. 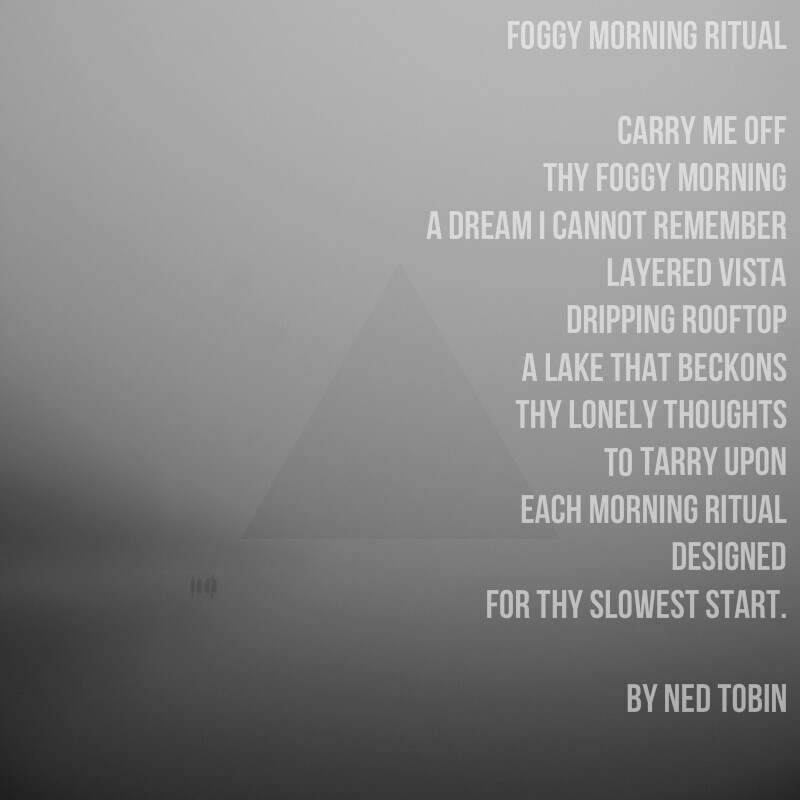 Hold me as we go out of our heads
And into stardust that
Continually floats about
Uncommon thoughts that live here.

Feel freedom with me,
Hold my hand tight
And sing a song
A little out of key.

Controlled by whipper-wasps,
Heavy in synchronicity
To our beating pulse
Through which our fingers touch.

For all that I could remember, for all I could ever remember, for all the times that I dusted off my aching knees to build up my power of love that thrust my gold into the clear blue skies; it was all I was, all I cared to be, all I had dreamed of being, all that was allowed to rest – to be the remnants of some hard played game digging into worn parts of my gloves.

For without these delightful glories (curdling my cream and harmonizing my deep south Presbyterian choir) I was merely a soldier. A hard edged, fine tuned, stainless steel blade of America’s finest earth (plus of course the blood, sweat, and rock hard fists heft my direction). Hardly left a consequence upon my check-marked debriefing.

Here I stood in future’s year, inhaling deep to remember what it felt like laying on the freshly mowed grass in the heat of summer, slow moving cars rolling along manicured gravel. An itch, creeping in and lingering a while as momma’s freshly squeezed – and heavily iced – lemonade tinkled around inside a transparent and sweating summer repair.

But now I wasn’t heading here or there. I wasn’t coming or going. I wasn’t even known amongst the squirrels and bluejays and Chester, the neighbor’s dog, had wilting flowers.

You cannot crush what once lived inside a boy. A man can not fall flat and lie upon his back and let these thoughts turn and turn and turn without the understanding of what has come to pass. Much like Tchaikovsky’s flurrying madness, torrent thoughts arrest my secret moments until the uneven dice with blank looking stares roll the number five five times in a row. To end a second chapter but never ending. Never an end. Never to be ended.

Without knowing then, I was knocking at a door I had left without looking back. A door that still had a mesh pane to keep out the flies. A door that creaked and banged shut no matter how slow it was released. A door that acted as the liaison between country folk and their well meaning manner. A door that punctuated my knocking and brought old – as in aging – footsteps squinted hard to recognize the stranger the stood just on the other side.

Maybe we balanced our cross-hairs when we sent our whispers into night’s air.
A long, hollow howl,
A song to our own dainty ears,
Wishing for night to tarry while bringing us sleep

Footsteps reaching horizons edge, so evenly spaced so late in the day.
How did we manage,
How many words were pure thoughts,
Lingering ’bout our hesitant breaths like foxglove in the summer.

This is a love poem to my own self,
All hairy and indulgent and breathing rapidly.
Because from the tips of my toes
To wisps upon the back of my neck
From the shape of my beak
To the curvature of my idle fingers
I am in love.

Constant thoughts that flutter through
Idle spaces of my mind
Keep my constantly occupied
With being me.
I love that it’s a gear
– Never ending clockwork –
Cycling through unidentifiable patterns
Undeniably grand

Our late night plans are always the finest
Delicacies like chocolate, popcorn,
And maybe even corn nuts
Fill up my dreams, the happy times
Times I spend my other time
Working towards expanding
Stretching it out so that even
Crunching noises become ecstasy

So my love, my true romance
It is my utter pleasure
To be yours forever.
Your breath is my breath,
Your thought is my care,
Your bend is my fold,
You are me, forever one.

So, I’ve lost my excuses
I ate them with magic mushrooms
Wrapped in fantasy’s glow
Ecstasy, running free like bombs

Like bombs that ring in my ears telling me to stop