They were called away
To a promised future
No clear sight far ahead
Vague plans, subtle promises,
Fame in modern times unment.
They mounted and faithfully
Road into the scene
No one there to greet them
No romantic sending off.
When skies turned blood red,
When comrades lay side by side
When torture was their enemy
No cotton handkerchief blew drying
For everyone was buckled down
Amidst chaos of the finest hour
A mission of uncertainty
And further, urgency
Flew towards in shrapnel
Devastating times of war.
At home awaited news at every hour
Mother, father, sister too
Hot soup for dinner every night
Hot tea to wake up to.

From depths I could hold a rope
Cold from my very hard struggle
A frosted window reminds me
Of a sister I once shared
My latest secrets with every other day
A shadow that reaches for my hand
Can take me again, can take me again
Spring comes again
Where once snow fell calmly
And golden eyebrows caressed me
With arcs lacking recollection
In a pool of my own reflection,
Looking back, looking back today.

I laid there bleeding cold
Everything I had not seen
Now coming to my mind
Eyes fading to clean
Void and his sister: darkness
Sources of all I forgot
Laid here by a pistol
Made elaborately to be sold
In a house where everything
Is made to be seen
And there I lay motionless
No less then ever
Missing from the scene.

I slipped in to camp quietly
And set the horse loose
Moon Cow was sitting outside his teepee
Waiting for me
And as I sat down next to him
He handed me a blanket
And asked if I had stopped to watch the sunset
I told him it had changed my life
And he nodded silently
Taking a long inhale on his tobacco pipe
And handing it to me.

“What will you do?” he asked
Pointing to the moon
I knew he meant my heart
I fished out my little arrow
From my breast pocket
And told him that everything was already answered
And that I was still staying the winter
If I was still welcome in his home
He said I was always welcome in his teepee
Unless he had a girlfriend
Joking a little bit at the white man’s ways
Then he nodded towards his sister’s teepee
“She is expecting you now.”
I looked and noticed
That Willow was standing with her door open
Firelight dancing along the grass
As she looked straight at me
I walked over holding her gaze.

She held the door open for me
And when I reached her
Stepping to go past
Into the warmth of her teepee for the first time
She reached out her hand
And touched my forearm
To look me in the eyes
Learning the story of my soul
I looked back into hers
And gave her the story of my soul
And I gave her my soul
When she had learned it
I reached out and touched her
And pulled her closer to me
And held her there
For a very long time.

This time she leaned in to kiss me
And I kissed her back
Until I heard a noise
Coming from inside the teepee
And I looked over
And it was Lily River
Smiling back at us
With her big eyes of joy
We all broke into happy laughter together
And Willow invited me to sit down next to her
On her bedding
And Lily brought us two cups of tea.

I looked up to wonder
How many years has your bark
Entangled your sinuous heart,
The very fibers of your girth
And timber, thick.
How long have you towered
Above the rest of your
Brothers and sisters
Reminding them through a good example
Of how big and strong they can yet grow?
And my mind runs along your vertical stripes
To follow the years of your growth
I count the markings
The lateral indicators
Of a healthy year or a false start.
And if I listen carefully as I stroll on by
I can hear you whispering my name
Reminding me of why I came,
And to whom I owe this poem. 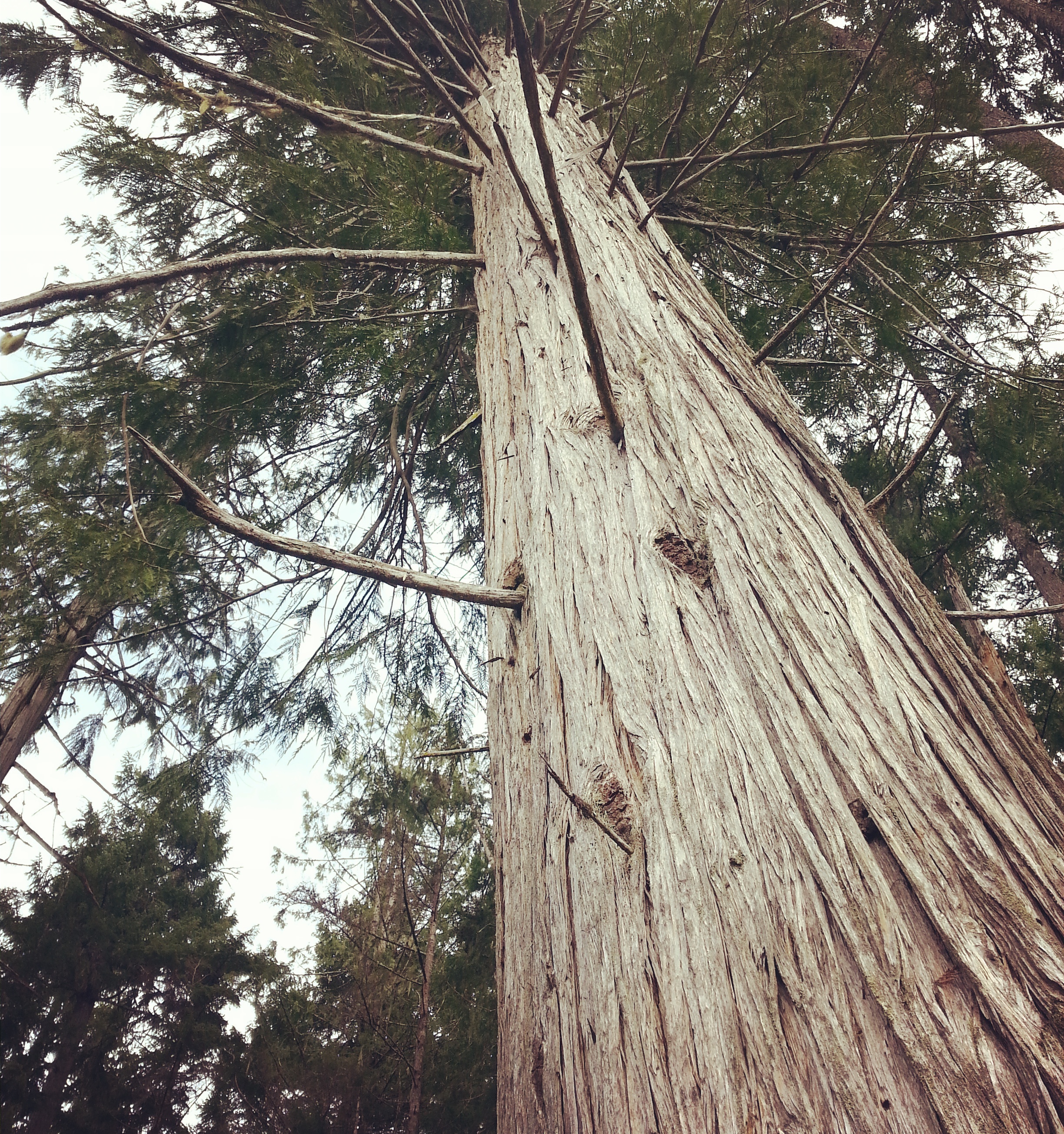 When did he ever know his heartache?
A landslide, at the base looking up standing tall.

Can the old boys help anybody now,
Since there’s a guardian knocking all them down?

There’s a wild side whenever anybody’s holding on,
Take a look now, tomorrow’s rhythm of any song.

Dusty sorts, way up there, but important bits reside beyond the whip,
Enough so, that a lazy angel has taken it to be her resting place.

Leather bound and locked without a lock.
Page four houndred and seventy three.

I watched the twins go back and forth on the swings today,
It kind of made me feel sea-sick, like when I used to go high.
I remember it was always funner competing
Against my brother or sister to see
Who could go highest.
Did you jump off at the end?
Perhaps that’s why my feet get sore sometimes now.

Could you ever have dreamed we’d both have twins
When we’d first met?
How we’ve both become family people now.
I like the family though, my small bit of world
I’ve nurtured around me.
It’s different then a close knit group of friends
All keenly interested and active in each other’s lives,
But I’m influential all the same, and I like the closeness
We all have regularly. My whole world.
Do you also get this feeling with yours?

Duke, our little fox terrier is getting quite old now.
Do you remember when we first got him?
I was looking at the photographs of him
As a puppy the other day, so cute.
He sits and comes when called,
And when we go for a walk he’s always very obedient.
He gets along with the kids so well.
I hate to think of life without Duke, but we must brace for it a bit.

Hope you’re well George,
We all look forward to your visit this summer.

The other men were friendly. They would keep a wary eye on me. I figured it was given the nature of my looks, but they relaxed as time went on. The women who weren’t married enjoyed my foreign seeming ways, especially so with Jules.

I figured she was around twenty three. She had long sandy brown hair that she would keep tied up in a loose bun that came down as she was going to jump into the water or when she was getting ready for nighttime. To me there was something unearthly beautiful about the moment she let it down. Every time I saw her doing this I would stop and every time I would stop she would enjoy the moment a little bit longer with her hair, steady herself, then look me straight in the eye. Every time. Of course I would just stare back with virgin love in my eyes.

Her father had been a traveling doctor in upper New York. She had six brothers and one other sister. Only one of her brothers had joined her to come out West, who was noticeably younger than her. The rest of them had virtually abandoned the two of them after their father had fallen out of his carriage one dreadful night coming home from an out-of-the-way house call.

Tim, her younger brother, and I got along good too as soon as he noticed my gun.

Jules had attended King’s College to study what she called “Money’s Seb. Money’s make the world go round.” It was hard for me to understand why a woman who knew money would head West in search of something different. It also confused me why such a soft spoken and earthed woman would be interested in money. Perhaps this was part of the reason Jules and Tim had left.

[note: to read the full epic track my land]

Smokey bandages flutter through the evening sky.
An autumn sun burns the day’s light
Through whiskey breath and campfire.
Cooling breeze shelters the afflicted from blackened breath,
Dire, sister, dire.
Animals have no home, foraging between un-agreed upon lines of human traffic.
Chain link fences only survive through this madness.

I lost my brother who shared my hat
And my sister who carried my coat
So I was left under the oak
Hoping the canopy would be my warmth.
But little did I know from behind the cedar
They were giggling and watching my plight.