Early one morning I was out banging rocks
I saw a young lady, she looked long and lost
I asked her her name
That’s when she cried
Into my warm shoulder her sorrowful thoughts.

There’s the blue skies to look at,
The trees to go in,
The birds always calling
To give you a friend,
There’s the clouds that have every
Masterpiece within,
And I’ll be here, Honey
Forever, Amen.

That’s when she caught me to give me a kiss
One mighty big one I’d forgotten I missed
She leaned in and looked up
With those beautiful eyes
Into my warm shoulder her wonderful bliss.

When the wind blows and the sun glows
My eyes take to close,
Just like when my girl goes
To lean in, so close,
Into my warm shoulder her tenderness grows,

My memory woke me up;
Two dollars and loose strings
Attached to each of my morals
Dangling cheaply
To the tune of a Tom Waits album
On repeat.
I’ve gone over the top again,
My finger jammed
Into some random container
Taking up space
On my single seated table.
Two young girls
Giggled in the corner
But quickly remembered where they were,
Checked their long blonde hair
And checked their phones
Together.
Tomorrow I’ll be here again,
I’ll wear my eagle belt buckle
That reminds me
I’m more than two dollars
On the good days,
And ask the waitress
With the good smile
To kindly take this container away
For it’s killin’ my mood, man.

My thoughts go back towards the dawn
You first appeared to me:
Awoken was I to rambling words
Two girls having quite some fun.
Little fireworks then erupted
– Thoughts of what the day could bring,
Sure enough I was distracted
Just as now I trail away.
You had a headband
Upon your ears
That made me think of a tough mudder
And a friendly friend and dog,
And a dog seat to be cleaner.
You smiled so freely, so effortlessly
So relaxed and free you felt;
The vibe of adventure,
Two friends forever!
One a nurse with a blue sporty car,
The other for pets her heart
Soon one me over, indeed so clever
A patience game of time.
Sure she may not have the shoes
For every single occassion,
But if she has the sandals for
The beach around the corner
Then maybe she will stay with me
And help me tune more fireworks.

I found a note I hadn’t sent
Two lines of written verse
Spoken like a man alive
Unbounded potential!
Waxing on about a sunflower
And the pretty girl who’d sent
Two off in a cup to plant
Ready for summer’s rays.
And like the smile she so shared,
River of a blossom
(Shining in its everglow
Truthfully a gem)
The beating heart of thy own chest
Found its very stamp.

No, not one to judge racially
Not one to define boundaries
Not one to mistreat, mistrust
I share in this mighty earth
Respecting green miracle of growth
And I’m just looking for a friendly girl
Who enjoys all the seeds that I sow.

Looking back it’s not easy
Had my heart on the line
Had too many unwritten songs
Yet nothing’ll stop me
My drive is what makes me
And I’m just looking for a friendly girl
Who enjoys going for a ride.

Please don’t take my feeling
Down another empty highway
Like raindrops off rooftops
I’ve been splashing my dreams
All over you, girl.

Feel in it; another crooked street
Turn me on with a vibrant song
Shake me by a gravity stick
Boom ba-da-boom-boom
And my song goes on.

I want a girl who wears black eye liner
As thick as her lipstick, black.
Who wears emotional sleeves in
Long, slender daggers
Piercing my emotional state
With a heart so green
I have a hard time understanding
Where my ideas have gone
In a heart, forever long
And edging ever closer to my slender daggers.

Where I come from, wounded soldiers are hid behind shadows and only come out at night when small dogs are being walked by wobbling, aging men wearing the same thing they’ve worn for 20 years. The leash, however, fits just as it should. I wonder, rather curiously, what sports or video game they’re missing as they pull the mutt home.

When I sit and stare at the business, it rolls by in a drawl so thick, screaming girls in stretch limos seem normal down city streets where younger hip dudes with Chuck Taylors on discard the evening’s steaming pile of dog shit into an overflowing disposal bin painted green.

Lights on a distant sports building shift through the lower half of the color spectrum, causing the young girls white dog to turn a more rusty yellow. I try not to look at her puppy while she ruffles the poop bag. Young white boys talking in a foreign tongue park their father’s white suburban in a permit required zone and pass their joint around as if it’s their first nudie magazine at summer camp.

I sit silently, sipping on my micky of Sailor Jerry’s and pretend there’s nobody I’m thinking of and somebody to walk home to. I left the light on beside the bed to give off some sort of impression anyways. 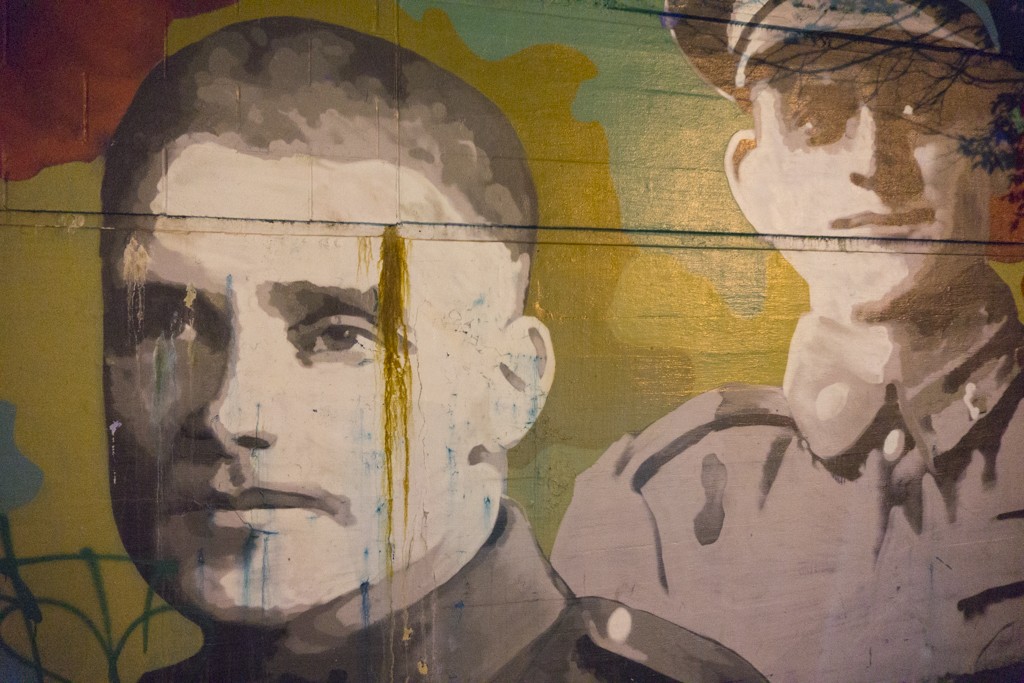 I heard of a girl
Who stole a mind
Left it for
Another kind.
Eenie meanie
Popped and grind.

“What happened to us?” we used to say.
Now we just roll our eyes at passing strangers
Doing strange things.

Now we just wave our flag and sip lemonade
While we wait for our favorite 6PM
Radio show to keep at our time.
What happened is we became victims willingly,
We accepted our lonely road
With righteousness.
We held our heads high and believed in a constitution
That was created and sworn upon in vain, in contempt, in disbelief,
Yet all of these cowardly apparitions
And beautiful speakers continued to wow our humble thoughts into thinking
It was all peachy.
It was ordinary.
We fought the ordinary and they learned to tell us it was remarkable.
We fought the remarkable
And they told us it was right.
So we changed channels but drank the same milk –
We never did find that girl,
But we did learn to cool the voice of reason
With fireworks and birthday parties
Because we deserved them.
We were hard workers and deserved our fruits.
We were hard workers and we accepted our lonely road,
But fought it believing what we’d been sold.

Sometimes I gaze into her eyes at night. She whispers words I’ve never heard before,
And we count backwards from our chairs
Until we reach a new paragraph in our romance novels,
And soon it’s time for tea.