I believed just so strongly that you would be the one
So much so that I chairiscuro’d my heart into day and night,
Night and day.
So longing with my open arms I stood uninterested,
Drooping at edges of my sanity
That left holes so deeply imprinted into my unknown matter
I had successfully reprinted what I’d callously called
“Out of Stock.”
Now? Now I would like to re-brand my interests,
Remove all the old artifacts that so delicately had collected
Dusty particles of my memory,
And remind myself how little it mattered in the end –
Dust being all that could sprinkle our dearest dreams –
As raindrops came tumbling down upon a rainbow I’d ignited.
So my desert teardrops exclaimed to my heartbeat, strong,
Oh this desperado desolato,
In an anguish that I could not anticipate…
Because spring had not yet sprung.

On the edge of my post they cried.
They sat down in a semi circle
With legs crossed and arms placed
Calmly about their laps
And sang to me with eyes closed
And angelic voices reaching from
Stern to bow.
There was an unanswered echo
That leapt from a good cause
To an outstanding motif
Highlighted in the sun.
Whence my eyes swept from
Juxtapose to just a reason
And calmly reminded myself
I was upon the edge of my post
Until they cried.

We all shake our gates to the sound of riddled irons
Ricocheting off midnight streets in lonely battle cries.
We dress formal, we provide answers,
We lose sight of retail for a better lease on life.
We do this. We pound our own hammer
With all our might, until fatal the blow
Or sharp the edge. 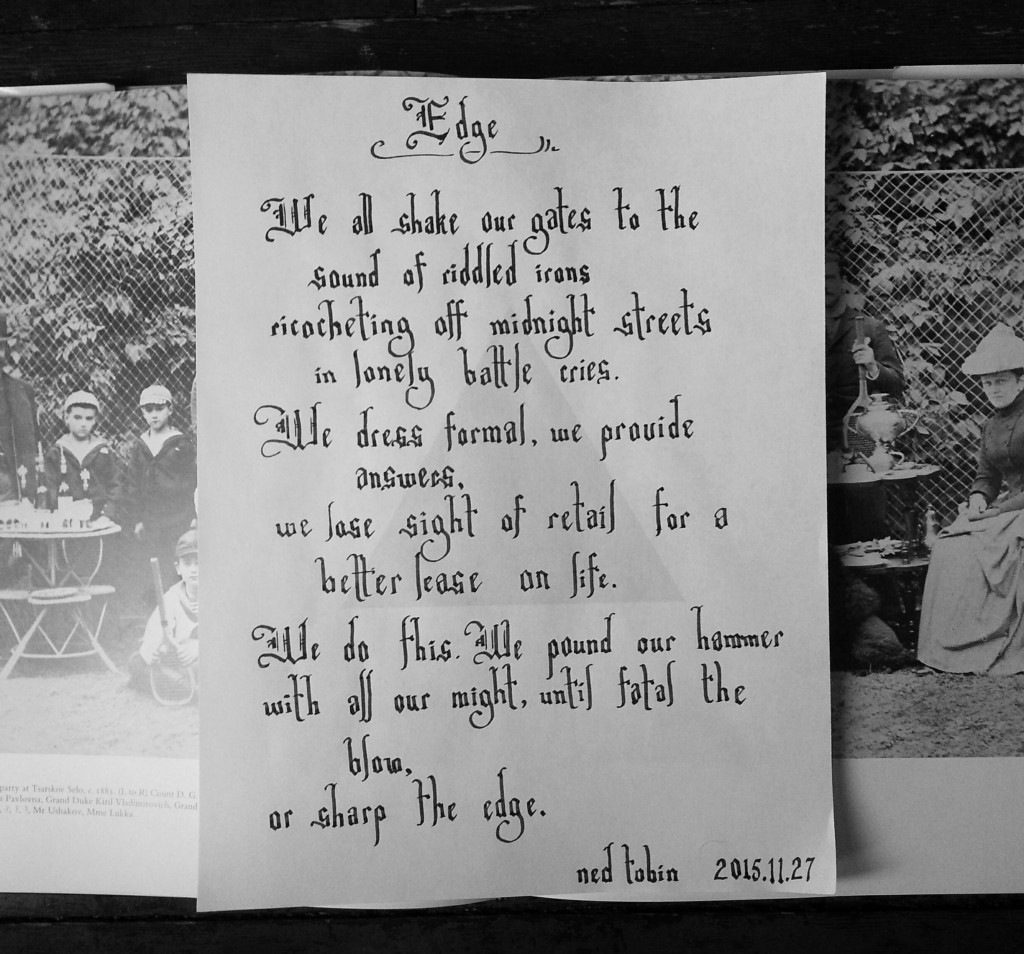 I lick at edges of society
To turn deep thoughts
Into euphemisms
That linger into silence
Directly following hearty laughter
With jaws dropping, gaping
Unblinking eyes staring
Without disgust, no,
With pure attraction
And desire burning
Deep into this heart.

Did I turn my heart around?
Did I let it lay me down?
Did I voyage, far, across this world
To be my Maiden’s crown?

One could surely fix a heart
Upon a stone so sound;
Let it beat, unto the end!
A thousand kingdoms strong.

And if dark night should come upon
A light that was so bright,
We’d know it as the beacon so
That guided us onward home.

To look upon the sheets so clean,
The pearls so radiant!
A lover who had never shied,
Never chance nor desire to lament.

For as my edge of feelings sought
The tender touch of her wings,
Supine be my heart for her,
My lover’s breath always unspent.

It was an unsuspected edge
That took my hand and sighed.
Uneven in my mastery I fell away,
Flew away.

Let to always wonder why
I never called out your name.
I told you where I had been,
Where I was going.

I tried to leave an irregular mark
On the sides of your world,
We shared silent space
Like a heart never knew to cry.

Now this razor upon the sharpener’s stone
Will caress our forever scents,
Chasing away hazy beach sunsets
In sweet ukulele remembrance.

This tap has run dry
Of its fine wine,
Just chips and dip left
On the mantle ledge.

A fire burns elastically,
Transfixing each gaze
Into a myraid of dreams
Slowly edging reality’s edge.

In the end of all of it I had a reason.
There were two dots crossed off a long list of imaginations
And the cowboy had everything left to lose should it fail.

But that wasn’t the event there that day, you see,
A long riflesman came staggering in as the town watched
Thinking to themselves about a memory they all-to-quickly refused to listen to.

I couldn’t help but think that I was an envelope,
A whisper sealed away awaiting some sort of lucky ticket holder.
My eyes remained calm as time’s length pushed on.

Crimson was the colour of noon’s high sun.
Picking pockets like a Bazaar thief in Catholic quarters;
The city clinched tighter.

There once was an island inside of my dreams,
Floating with unseen amounts of impossibilities.
I was homesick. I wasn’t allowed to be there anymore.

So for now they sang, in cool shade of a willow tree.
And a stable meant for their local butcher
Fed the gatherers, who all at once came.

Dust kicked up my hallow heart’s worms and sheered into the edge;
At once I was offered fine takings
And imagined I was an elder.

Your undress peels me back,
It ignites surreal aspects
Of serene daybreaks
That freeze whirlwinds
And strangling tempests.

Yet here I stare;
Perched upon grace’s edge,
Upon worn branches
Of a thunderstruck nevermore,
Straddling time
And weighing options.

Alone was a word I never liked to admit. Like a figured dancer eying me up, I was always open for business and I knew – just like my salacious friend did – that business was good. I had markets that twisted and turned at mere sight of me, with anticipation gripping at their tongues for the ride.

It was merely a park bench, peacefully perched and calling my name. It wasn’t an alert beacon. It wasn’t a silent sentence. It was slightly weathered and modestly epitaphed like a sea faring ship that’s seen more ports than a pin-legged sailor.

From here – ahead – was a paved path, a hand railing painted green with two levels by design. Beyond was my view. A marvelous vista when the hour was right, when west was like glue to the sinking horizon’s glow. Out past the railing fell straight down to the harbour’s edge. Large placed stones from some time ago that showed signs of the high water level, green signs that turned to slime. Docks stuck out from the coastline like a fine tooth comb, each held about 15 ‘small yachts’ I liked to call them. From this view, I only saw the smaller boats. The bigger boats were at the high class end of the docks.

Beyond the docks: a jetty cut across my view. A small but meaningful light was perched about the tip of that jetty like a lonesome maiden waiting for her sunken sailor to return home. I had watched him as he went.

I watched the little sailors swing left and right as they traversed the open ocean beyond the jetty. Like clockwork they’d know it was time to get back to harbour, awaiting darkness.

I had always dreamed of being a sailor. Of learning to know winds like the mighty albatross so high. I dreamed I’d look out, squint eyed and wearing my navy blue pea coat, knowing and listening. I’d always wonder at what I’d be wondering. I knew the weather would be on my mind like a fair maidens stockings dangling ’bout her ankles.

I dreamed you’d be that fair maiden, wavy blonde curls about the edges of your shoulder. I watched your smile as you listened and responded. I watched you nervously bend your ankle sideways and think of a plan, unconsciously grabbing at a curl. I watched your footsteps, perhaps as you watched me, playing with little things to distract your mind.

I waved goodbye, but you didn’t see. I wasn’t mad. It was the way of the sea. I had learned this much in my years, and was already in deep conversation with myself about the speed of ol’ number 3 breaking waves heading out into the horizon.